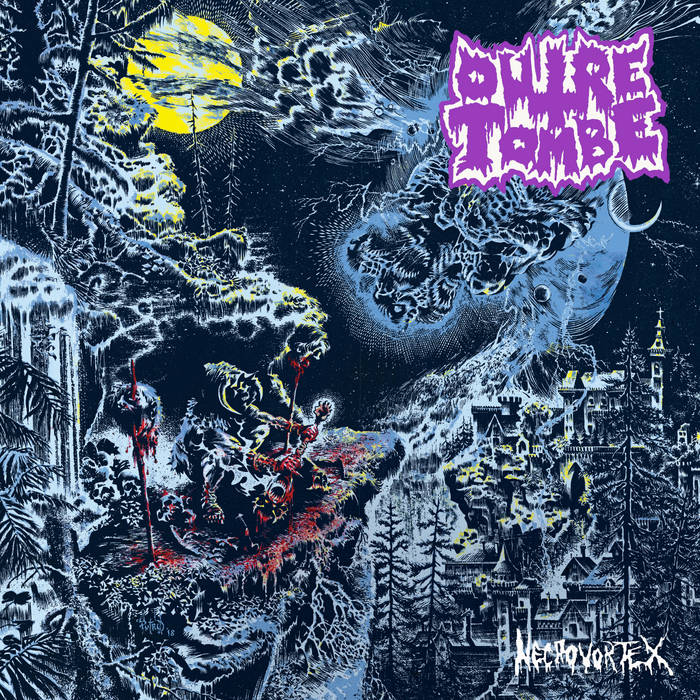 AbsoluteHatred I’d waited a long time to get this album. I totally love the dirty, gritty feel to it. I may not understand a damn word they are saying but this shit is killer Favorite track: Écorché Vif.

delirium trigger I've had this in my wishlist since the AMG review in 2018/19. Never got around to it, and shame on me. Some of the most kickass death metal of the last few years. You can hear the influences, but Outre-Tombe have created their own riffy beast. One of my favorite Canadian, let alone Quebécóis, metal bands (looking at you Forteresse-now put more stuff on BC!). Buy this album to give yourself the motivation to get your ass off the couch during COVID, even if you're too busy headbanging to workout
more...

After three years of deathlike silence, Québécois death metal adepts Outre-Tombe return with Nécrovortex, their second album of grotesque graveyard anthems. To the band’s credit, Outre-Tombe have not attempted to flood the underground with useless releases; over the course of their eight-year existence, the band has released a single demo and two albums, all of which are meticulously written, performed, and recorded. This methodical approach to their work is part of what sets Outre-Tombe apart from the majority of their peers. With this album, Outre-Tombe continue to sharpen their sound, which faithfully captures the essence of late 80s and early 90s death metal. Outre-Tombe’s influences are no secret—they clearly draw inspiration from bands such as Grave, Nihilist, Asphyx, and Pestilence—but rattling off a list of classic death metal influences doesn’t do justice to the impact that Outre-Tombe achieve with their music, a sound that is as relentless as it is morbid. The songs on Nécrovortex are generally aggressive and pummeling, leaving the listener with little or no respite from the assault, but even at breakneck speed, there’s a compositional intricacy on display. These songs reveal the aural machinations of horror and death through riffs that are coordinated, precisely carved and chiseled, and surgically sutured together, tightly, with no room for error. The production is just crisp enough to allow the instrumentation to stand out, permitting the listener to grasp the many memorable riffs around which each track is constructed. The vocals are also unique. Bassist and vocalist Crachat captures the guttural essence of the French language with his vocals, disgorged and spewed across the tracks. Like every element of the band’s sound, the vocals are insistent, commanding attention. Lyrically, the band focuses on horror and the macabre, but with a rare degree of sophistication. For those capable of deciphering French, the imagery conjured by the lyrics is extraordinarily vivid and perfectly suited for the music. Completing the overall presentation of Nécrovortex is cover art masterfully created by Matt “Putrid” Carr. It is, therefore, with tremendous honor that Temple of Mystery Records presents Outre-Tombe’s second offering on black vinyl, as well as a limited die-hard colored vinyl edition.

Located in the quiet but beautiful village of Lac Simon, Quebec, Canada, Temple of Mystery records is a young underground metal label focusing on quality music from all over the world. All of our albums – wether they are released or distributed are carefully selected in order to bring you the best in heavy/doom/black/death metal. ... more

Bandcamp Daily  your guide to the world of Bandcamp